< Back to Newsletter Index

On May 29, 2013, the Environmental Protection Agency (EPA) issued proposed rules to set limits on how much formaldehyde may be released from composite wood products. NTA has put together some questions and answers that attempt to explain the EPA regulations, as well as highlight some of the differences between them and the current California Air Resources Board (CARB) Airborne Toxic Control Measure (ATCM) program, which regulates formaldehyde emissions from composite wood products destined for the California market.

What is formaldehyde and where is it used?

Formaldehyde is a colorless, flammable gas that has a distinct, pungent smell. According to the California Department of Public Health, it can cause irritation of the skin, eyes, nose and throat when breathed in, and at very high levels of exposure can cause some types of cancers. Formaldehyde is used to manufacture a range of building materials and numerous household products, such as shampoo, cosmetics, dish detergent and fabric softeners.

What’s the history behind these proposed regulations?

On July 7, 2010, President Obama signed into law the Formaldehyde Standards for Composite Wood Products Act, also known as the Toxic Substance Control Act (TSCA) Title VI program. This legislation set limits on how much formaldehyde may be emitted from composite wood products including hardwood plywood, medium-density fiberboard, particleboard and finished goods containing these products. The law charged the EPA with developing regulations to implement the new limits and ensure they’re being met*.

What’s the stated goal of the proposed regulations?

According to James J. Jones, EPA’s acting assistant administrator for the Office of Chemical Safety and Pollution Prevention, “The proposed regulations reflect the EPA’s continued efforts to protect the public from exposure to harmful chemicals in their daily lives. Once final, the rules will reduce the public’s exposure to this harmful chemical found in many products in our homes and workplaces.”

The EPA’s proposed rules align, where practical, with the CARB ATCM program, thereby putting in place national standards for companies that manufacture or import these products. Once enacted, the EPA estimates that formaldehyde concentrations in new and renovated homes will be reduced by 9% to 25%. They also anticipate a growing trend by the industry toward switching to no-added formaldehyde (NAF) resins in products.

What’s the cost-benefit ratio of the regulations?

The proposed formaldehyde emissions rule, as originally sent to the White House Office of Management and Budget’s Office of Information and Regulatory Affairs (OIRA), was estimated by the EPA to have a benefits range of $91 million to $278 million. However, once a thorough review was done by OIRA, they calculated a benefits range of just $9 million to $48 million. The EPA admits that the estimated costs of the proposed rules exceed the quantified benefits. However, it claims there are additional “unquantified” benefits due to other avoided health effects that, when factored in, justify the costs. The EPA’s analysis is summarized in the chart below. 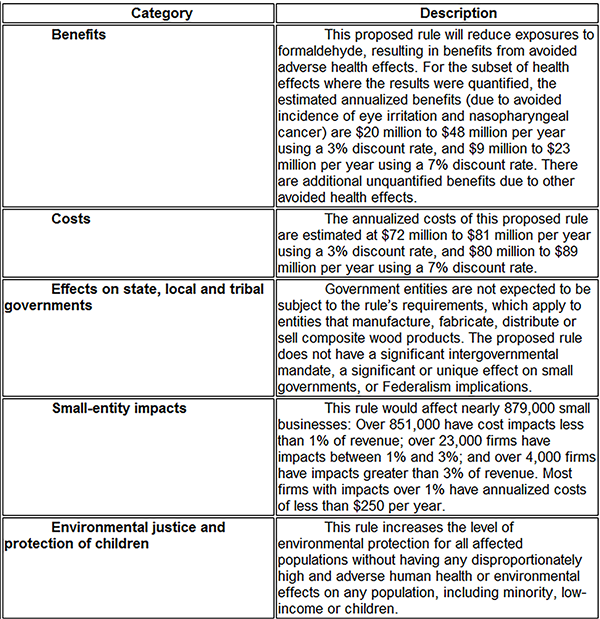 Can NTA explain the regulations in more detail?

As required by the law, the first proposal sets limits on how much formaldehyde may be released from composite wood products, including hardwood plywood, medium-density fiberboard, particleboard and finished goods containing these products, that are sold, supplied, offered for sale, manufactured or imported in the U.S. It also includes exemptions from some testing and record keeping requirements for products made with NAF resins. This rule includes additional provisions for:

The law also requires the establishment of a third-party certification program to ensure that composite wood panel producers comply with the established emissions limits.

Under the proposed framework, third-party certifiers (TPCs), like NTA, would be required to apply to EPA-recognized accreditation bodies who would verify the certifiers’ ability to ensure that panel producers comply with the formaldehyde emissions standards. The EPA is exploring the use of internationally accredited certifiers, rather than those monitored by CARB, so that third-party testing of both U.S. and imported products is consistent. Under this rule, TPCs would audit composite wood panel producers and verify compliance with the formaldehyde emissions standards.

The TPCs would be responsible for activities such as:

How much time do panel producers have to comply with the new regulations?

The EPA is proposing to establish the manufactured-by date at one year after promulgation of the final rule. This is primarily to allow for development of the third-party certification infrastructure and to give those panel producers not already complying with the CARB ATCM program adequate time before the manufactured-by date to select an accredited TPC (like NTA), develop a quality control manual and complete the initial testing to qualify for product certification.

What’s the biggest outcome from the new regulations?

The CARB predicts the required TPC audit of fabricators will be costly, from both a time and financial perspective, due to these factors:

Comments or ideas on improving our newsletter? Send NTA your feedback.