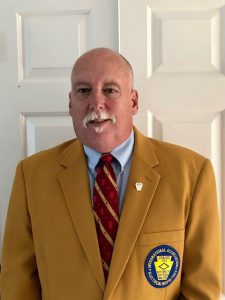 David has served IAEI as a Virginia Chapter President and Southern Section President. David is certified as a 1&2 Family, General Electrical Inspector, and Electrical Plans Examiner, and he holds a Virginia Master Electrician’s certification. David was an electrical apprentice instructor in Richmond, Virginia, from 1989 until 2005, and he additionally served as an advanced electrical instructor for the Virginia Department of Housing Code Academy.

David has conducted numerous electrical seminars and training programs for the Virginia Chapter of IAEI, and he now serves as a seminar instructor for the IAEI International Office. David serves on the NCPCCI Electrical Exam committee; he has served as the principal IAEI representative on CMP 8 for the 2008 and 2011 NEC cycles. David has also served as the IAEI representative and Chair of CMP 9 for 2014, 2017, and 2020 NEC. David is currently the chair of CMP-2 for the 2023 cycle.